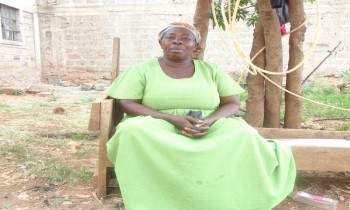 50 year-old Zipporah Muhonja Otieno is a mother and grandmother who lives in Mathare Slum. She runs a grocery shop and is the founder of a self-help group called Lucky Women.

Mathare is the second-largest slum in Nairobi. Having lived here for over 37 years, Zipporah has experienced poverty first hand. Women, especially, often have no source of income and depend on their husbands to provide for them. “I have seen women struggle to get food on the table, going without it or having to beg,” says Zipporah. Determined never to let this happen, Zipporah started selling groceries with only Ksh 200 as her starting capital. She explains how she then came to found the Lucky Women chama: “Women would come to my grocery shop to buy vegetables on credit. And then they would say ‘but I have no cooking fat or flour to prepare a meal’. So I literally ended up giving away the vegetables on credit and also giving these women money so they could prepare a meal for their families. Some could re-pay their debts, but some could not.”

The experience prompted Zipporah to bring these women together to help one another by forming a chama. They started contributing very small sums and the amount they collected was given to one member to start a small business. One of the rules was that once a member’s business was stable, she must refund the amount that was given to her without interest. This happened until all members had established an income. From then on, any amount borrowed is refunded with a small interest. They opened a business account so they could save their contributions when there was no one to borrow.

Early this year, Zipporah became very sick and had to seek medical care. The doctor discovered that she had high blood pressure. She was put on medication and booked for monthly checkups. After four months of medication and monitoring, she has improved and when she has any complaints she visits a clinic to check on her pressure.

She had wanted to join the National Health Insurance Fund (NHIF) but didn’t know how to. So when the M-Health program team explained how M-TIBA works, she was happy to join. She is determined to contribute every month because as long as her health is good, she can keep her business running.

Zipporah took over the responsibility of providing for her family after her husband was made redundant in 1998. Although most of her eight children are grown up now, they still depend on her because some are jobless and others are in school. In a single room, Zipporah and her husband squeeze together with her grown children every night. She wakes up at 4.00 AM every day, prepares breakfast for her grandchildren and then takes a bus to Gikomba market to purchase the vegetables she sells.

Zipporah does not want to see people suffer if they can work to support themselves. She says it is a shame for women to always depend on their husbands. She wants to see hard-working women making their own lives. Her life is testimony to how chama’s and the M-health wallet help emancipate women in the slums.