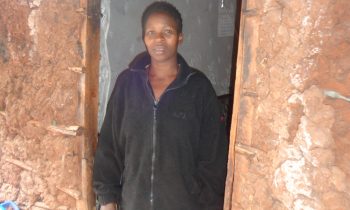 Rehema Nyangi the 12-year-old daughter to Daniel Otieno and Hamisa Hamisi was diagnosed with cerebral palsy at birth and later on autism. At the time of her birth, Rehema had insufficient oxygen and her condition led to her staying in the Intensive Care Unit (ICU) for a while.

As her mum Hamisa was leaving the hospital on the day Rehema was born, the doctor explained to her about her daughter’s health. “I remember the doctor saying that my daughter had brain damage and this may cause long term damage and as such she has special needs” He advised that Rehema should start treatment immediately. Back at home, Hamisa discussed with her husband about Rehema’s condition and agreed to start medication as advised by the doctor. With the hope that their daughter’s health would improve, they took Rehema to the hospital where she received medication and physiotherapy sessions.

Rehema’s health has been challenging to an already struggling family. Having cerebral palsy and being autistic means that she has to be on drugs constantly. Hamisa, who was employed by Stripes industry in Industrial area, had to stop working to take care of her daughter. Financial challenges have increased as income is from one party, Daniel who does casual jobs.  School fees for Rehema’s siblings is also limited and most of the time they are out of school due to lack of fees.

Rehema’s development has been slow and children her age have progressed more than her.  At times her treatment has been interrupted due to financial constraints.

Hamisa who was a member of National Health Insurance Fund (NHIF) stopped saving with the scheme once she became unemployed. Luckily, Rehema was registered into the scheme by the government in July 2016. With Hamisa not being able to raise the required amount on a monthly basis, she was happy to learn about M-TIBA where she can save any amount of money at any time. Hamisa was happy to join M-TIBA and told her husband about the mobile health wallet who became interested and promised to start saving, now that his son will be sitting for his high school examination in October this year and he will have some financial relief especially when it comes to school fees.

Hamisa knows the importance of a medical cover because she used her NHIF to pay for medical bills when she gave birth to Rehema. At the time, she was working and with the help of her employer, she was able to save. However due to low income and a lot of needs saving became difficult. Hamisa hopes for a better life in the future especially once her children succeed in life. Her prayer is that wherever her children will be, they will not forget her. “The best gift to give to a child is education and that is what we are trying to do even though they don’t go to good schools we have tried our best”. She encourages all parents with children with disabilities not to lose hope but to accept them and take care of them.