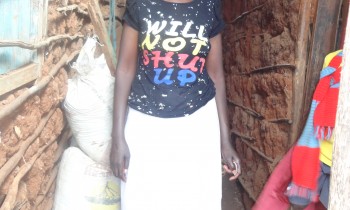 Faith, a pupil at Olympic Primary School in Kibera, has been experiencing epileptic seizures for years. According to her mother Esther Auma, the problem started when she was 3 months old. Faith had an initial seizure while waking up from sleep one day. After a few days it happened again, this time, as Esther was holding her in her arms. The problem continued and Esther decided to seek medical help at Kenyatta National Hospital (KNH).

But after being seizure free for 5 years, they came back in 2014, this time accompanied by headaches and vomiting. Esther took Faith to a nearby clinic (St Night) where she was given medication, but there was no improvement. The condition became more serious when the seizures grew more frequent. The illness began affecting Faith’s school work and self-esteem. At her age, Faith is going through the challenges of adolescence, but the epilepsy adds to her distress. Schoolmates laugh at her and make her feel rejected. Luckily her siblings understand, however, and they play with her without discrimination. The neighbourhood children are also friendly, running to call her mother whenever she gets a seizure.

Life for the family became more difficult when Esther’s business closed down. Esther miscarried her fifth pregnancy and could not continue to work. She used to sell snacks, and helped provide for their children. And with her small business income she had been able to join a chama. Unfortunately, all Esther’s savings from the chama have been consumed, which has forced her to opt out. Now her husband, a casual labourer, is the only one supporting their family.

More than anything, Esther would like to see her daughter get well. But this can only be achieved when she has money. Her plan is to raise funds to get her business up and running again so that she can go back to the doctor who treated Faith at KNH.