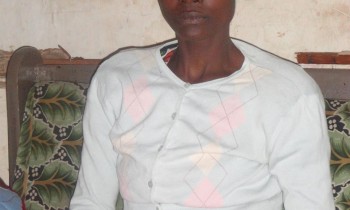 Beatrice Omusula, a 34-year-old resident of Kibera and a mother of one, has been battling dysfunctional uterine bleeding for 5 years. When she got married in 2012, everything was fine, until one month her menses was delayed. At first it did not worry her but when it came, she was in a lot of pain. The pain intensified and she was bleeding heavily.

Beatrice sought medical help in one of the hospitals nearby. By the time she arrived at the hospital, she had lost a lot of blood and the clinician concluded she had probably miscarried. Beatrice was admitted immediately and a curettage was performed. But all was not well. “Things happened so fast, and I don’t remember the doctor carrying out any tests to establish whether I had miscarried.” After the procedure, Beatrice remained unconscious for hours. When she did come to, she was very weak.

With no improvement she was transferred to another hospital where she remained for two weeks. Here they established that she had not been pregnant to begin with; the bleeding had been caused by other factors. The curettage procedure had been wrong. The clinician at the hospital managed to control the bleeding and recommended a scan at Kenyatta National Hospital (KNH).

Beatrice was discharged and she went home, where the young couple struggled. She needed a lot of care since she could not do anything by herself while her husband worked outside the city and came home only on weekends. The bleeding continued and because it was the only thing she could afford, she opted for herbal medicine.

But Beatrice has been suffering with the complaint ever since. This was why she joined the M-Health program. She learnt about it through her sister Tabitha. Tabitha shared the benefits of the program with her, and when she could, she joined herself so she could save money to improve her health.

Beatrice has not been able to conceive which has led to her separating from her husband. She is unsure whether her uterus is in good condition, especially after the curettage. She is certain that the hospital where it was done lacked professionals and fears they may have caused more damage. However, she has no proof. With no finances, Beatrice has not gone for the scan and her savings in her M-health wallet are not sufficient. Her income of Ksh 6000 per month as a house help is not enough.

Despite the challenges she faces as a single mother, Beatrice is determined to persevere, as her daughter depends on her now that they have started a new life without her husband. Beatrice joined the National Health Insurance Fund (NHIF) two months ago with the hope of seeking treatment.