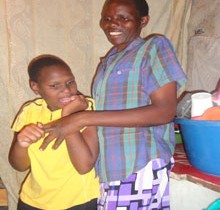 Pamela Mmbone, a resident of Kibera, wishes her 14-year old daughter Kezia could walk again. But due to cerebral palsy Kezia can neither walk nor speak and requires round-the-clock assistance.

Pamela had Kezia, a healthy baby girl, in March 2002. Kezia’s life changed overnight when she went outside to play with her friends one day. At around 11.00 am, Pamela heard a voice from outside. It was one of her family members, carrying Kezia in her arms. Pamela rushed out to see what was happening, but the child was in a terrible condition. “I could not believe what I saw.” She panicked and cried. Her father-in-law claimed the cause of her sickness was a curse.  As a mother Pamela did not want to see her daughter suffer so she waited until her father-in-law had gone to check on his cows, and rushed her child to the nearby hospital. But she had no money and had to return home.

Kezia went without further medical care for more than two weeks. Pamela could not get the money together, although her husband, who was away on a job, knew about the sick child at home. When he came home, Kezia’s condition was worse and she was taken to Moi Referral Hospital Eldoret where she stayed for more than two months. A doctor had discovered an abnormal growth in Kezia’s brain and surgery was necessary to remove it. But a lack of finance made this impossible.

Pamela had to take her daughter home again. But the family isolated her, claiming the child was cursed. She was forced to join her husband in Nairobi and find work. Pamela worked hard to bring her six children to live with them in their one-room house in Kibera. She wanted her family together despite all the challenges.

Pamela’s husband could not stand the tough times they were going through. In 2006 Pamela came home from work one day, to learn that her husband had left. He has never come to check on his family since. Pamela joined a chama for support. On her small income she participates in chama activities, including saving for her M-health scheme. She was happy when she could start using her health wallet. “Before my daughter got sick she could speak, but now, she can only produce sound. I wish the wallet had been there when she first fell ill.” Although her wallet is not enough to cater for everything Kezia needs, Pamela uses it to cover the basic health needs.

“My wallet has helped me so much, especially in desperate moments when Kezia needed urgent care.” Pamela is not able to save for health insurance which could have helped Kezia especially. Income from casual jobs caters for food, rent and detergents. Since Pamela cannot afford diapers she has to frequently wash and change Kezia’s clothes.

As tough as life is for Pamela, she has hope that her daughter will get better and life will improve. She hopes to buy some land and build a home for her children. She finds consolation by keeping busy and reading. “When life is tough, sometimes I turn to the Bible.”