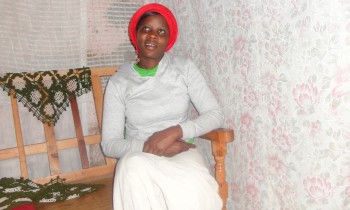 A better and healthier life

Geoffrey Onyango is 8 years old and is the first born son of Linet Auma from Kibera, Nairobi. Geoffrey was born normal, strong and healthy and his mother cannot remember ever frequenting the hospital because he was sick. However, Geoffrey came down with a fever but since it wasn’t too bad his mother gave him pain killers and dressed him warmly. Linet observed him while she went about her chores.  By evening he had become worse so Linet decided to seek medical attention at a nearby clinic.

At the clinic, Geoffrey was attended to and treated for typhoid. He was given an injection that evening and they went back home. He seemed to have improved because he was not shivering anymore. The following day, Linet prepared him for school and he left. When he came back from school, his mother continued with chores and he went outside to play with his friends. After completing her chores, Linet went outside and told Geoffrey to come inside, but he didn’t respond. She called him again but he continued playing. Annoyed she walked towards him, pulled him aside and scolded him for being disrespectful. After a while he explained to his mother that his ears were blocked and he could not hear her. Linet did not believe it and thought Geoffrey was trying to be naughty. She tried again but he did not respond. Out of worry, Linet decided to take him back to the hospital where he had been treated the previous day.

She went back to the clinic and was referred to an ear, nose and throat (ENT) specialist. After a lot of tests it was clear that Geoffrey had lost his hearing. It took a while for Linet to accept the situation considering that no one from her family had a similar ailment. The doctor was very helpful and sat down with Linet to discuss Geoffrey’s condition. He offered support by identifying a special school for Geoffrey. The doctor linked Linet to the principal of the school which is within Kibera after which she proceeded to get Geoffrey enrolled in the special school.

Geoffrey’s condition meant a lot of changes for Linet. She is forced to work extra hard to support her sons. Despite the challenge of adapting to sign language and the new school, Geoffrey is doing quite well.

Linet finds it difficult to budget for her bills like school fees for Geoffrey and for future healthcare expenses. Linet heard about the recently launched M-TIBA health wallet and she wants to start using it because that could help her save money for healthcare. With M-TIBA she can be sure of having money for healthcare which will not be at the expense of the education of her children. She believes that with good education, they can have a better life and even move out of the slum.