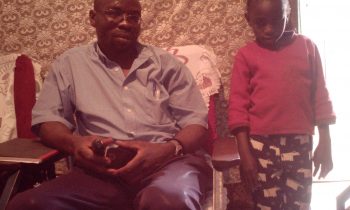 Undying love of a father

Nine-year-old Maggie Atieno is the first born child of Job Omondi and Emily Akinyi residents of Lindi Kibera, a slum in Nairobi.

Maggie was born at full term however, her mother underwent prolonged labor that resulted in hypoxia (the infant lacked oxygen at birth). With the help of doctors, Maggie was resuscitated and she cried out, a sign that she was breathing. The doctor pointed out that Maggie had developed minor cerebral palsy due to lacking oxygen. The unexpected news led to Job taking his daughter then eight months old for her first physiotherapy treatment at Kenyatta National Hospital.

Being a special needs child means that Maggie requires special care. At the same time, Job’s income as a Community Health Volunteer is not enough to cater to his family needs despite getting support from his wife who does casual jobs. Job’s family is experiencing a lot of challenges and due to this, Maggie’s schooling at Little Rock has been affected. With insufficient funds to pay for fees, Maggie had to drop out of school. Her father would take her to a church center where she met with other children with special needs like her. Failure for Maggie to continue with her schooling at Little Rock worries Job a lot since the church center lacks an education specialist for special children.

With such responsibilities, Job has been forced to default his contribution for National Health Insurance Fund where he has been a member for many years. Also, when the amount for individual contribution was raised to Ksh 500 per month, Job was not able to raise the amount. However, with the roll out of the M-TIBA health wallet for individual saving for health, Job joined the scheme after a lot of inquiry. Job prefers M-TIBA since he can save as little as Ksh 10 per day. He feels the scheme is accommodative as he can save depending on his income.

Job prefers being in the health scheme because he faced a lot of challenges when Maggie is actively going to physiotherapy. The cost of one therapy session at KNH was Ksh 300 and she had two sessions per week. Being a member of M-TIBA, he can save money for current and future health expenses.