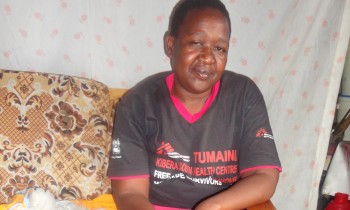 The Plight of a Kibera Woman

Mary Afande is a widow and mother of four, living in Kibera and working as volunteer at a clinic within the slum. She started having abdominal pain early this year and promptly consulted a doctor at the facility where she works. The pain continued even though she was given antibiotics. On 28 January, the pain intensified. Mary went back to the doctor who recommended a scan. But she did not have the cash to pay for it, having spent all her income on her daughter Diana’s education. However, Mary had been saving in her M-Health wallet. She went for her scan and was relieved to be able to pay using her M-Health wallet. Little did she know that there was a greater burden coming.

When Mary’s results came back she was diagnosed with appendicitis and was immediately referred to Kenyatta National Hospital (KNH). The doctor there urged her to act quickly. The swollen appendix could rupture if not treated, causing complications that could be life-threatening. Back home Mary could not sleep. She was very worried because she had no cash for her treatment, and she was in pain. The same night, she informed her children about her condition and why she had been referred to KNH. “It was very difficult for me to face my children and let them know about my condition.”

On 2 February, Mary went to KNH as recommended. She was declared an emergency with immediate need for surgery. Mary called home and her son Vincent came to join her. At KNH Mary experienced great financial challenges on top of her health issues. She had no cash to pay for the hospital and she could not turn to NHIF, the government health scheme, because she had failed to contribute for two months. Luckily, Mary received support from her employer who paid the hospital bill. An open appendectomy was successfully performed. The financial ordeal at KNH is one memory that will stay with Mary. Even after saving for years with the government health scheme, she could not benefit. Mary now prefers her M-Health wallet. “My NHIF card became insignificant when I needed it most.” Mary would love to have health insurance. “The only problem with insurance is that it is very expensive, which is a challenge for people on small incomes like me,” says Mary.

Being a mentor mother in Maternal and Child Health (MCH), Mary shares her experience with other women and informs them about the importance of good health.  “Good health will enable you to work and cater to the needs of your family.” She encourages them to join groups like chamas because it was through her chama that she learned about the M-Health wallet.

It is now five weeks after surgery and Mary is recovering well. The children are in school. Mary is free from pain and has resumed work.