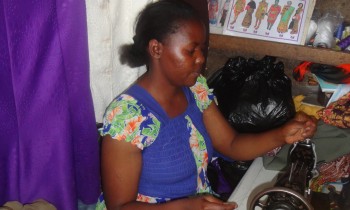 Strength of a Woman

Despite inconsistent income, Claire Auma wakes up every morning hoping to make some money from the small tailoring business, she runs together with her husband in Makina area Kibera.

Just like any other business, they face challenges and sometimes end up closing at the end of the day without any income. The shop is their only source of income and all their needs, including those of their two children, are catered to from the income generated from the shop. “Income from this work caters for everything including my savings for my M-health wallet” The budget is made depending on the income of that particular day. The majority of their customers are casual laborers whose own income is not guaranteed and therefore pay in installments.

When it comes to expenditure, basic needs have priority, which means food comes first followed by house rent and then rent for her business. The surplus amount is put aside to cater for school fees, which at times takes a while to raise. Sometimes Claire has to borrow from the Chama. After seeing the importance of the M-Health wallet, Claire now saves for health as well. “We work hard to ensure that at end of the month we settle bills although sometimes the income is insufficient.”

A recurring headache made Claire uncomfortable, most of the time affecting her work. To relieve the pain, she would buy painkillers from the pharmacy. “I was in pain most of the time and I could not work.” Purchasing drugs over the counter for an unknown disease cost her a lot, until she visited a health facility where tests were carried out and she was diagnosed with high blood pressure. It needed to be controlled and that is when the doctor prescribed her medication. Being sick had a great impact on the entire family. Their income went down since they were now dependent on income from only her husband. That little income was most of the time spent on medication. The situation forced them to cut back on consumption especially on their basic needs affecting their general well-being.

According to Claire, health shocks have a greater impact compared to other shocks since bad health affects one’s performance. She remembers when she was in pain and not able to work thus overburdening her husband who became the sole bread winner at the time. “Today life is very expensive and to face the situation, we need to join hands”. Thanks to the M-health wallet, Claire can now get treatment monthly, at a cost of Ksh 200 (2$) and after every clinic visit she is given an appointment for the next visit. She is happy because with her health wallet she can  pay for the treatment. To be able to control high blood pressure, Claire does not only depend on drugs but also observes her diet according to instructions given by the doctor.

In addition, Claire has been able to meet with other people suffering from the same disease. The last time she met with them was in September in a forum sensitizing the community about lifestyle (chronic) diseases. “I remember people talking about how they have been forced to eat food without salt.” They advised one another about healthy living. Saving for health is very important. “I say this because my wallet has really helped me.” Before the introduction of the wallet, Claire used to buy drugs from the pharmacy but now with the wallet she received proper diagnosis and the right prescription. Her wallet has been useful not only to her, but also to her children.

The cash Claire saves in in the M-health wallet can only be used to pay for medical services. Another advantage of the wallet is that there are no charges for transactions made using the wallet. Only the amount the patient was charged will be deducted and at the end of transaction, the wallet holder receives an SMS telling him/her about the amount used and the transaction is closed.

Claire would like to see people develop the habit of checking on their health, not only when sick but anytime, to help reduce discovering diseases at an advanced stage. According to Claire, hypertension is a silent killer and such a disease can be controlled before it causes further harm such as a heart attack.