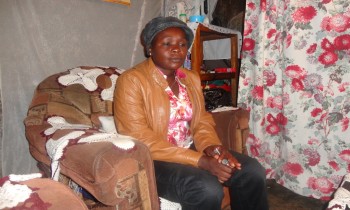 Paying for Medication with the M-health wallet

Other than an M-health wallet, people in Kibera often have no other form of saving or insurance for health because their income is too insecure.

Caroline Akinyi, a widow and mother of two and a resident of the slums Kibera in Nairobi, remembers vividly one Tuesday morning last February when she left her house to go to work, but ended up in hospital.

Caroline runs a small hairdressing salon. Her income depends on the availability of clients. “In business there are good days and bad days, and there is no guarantee that you will have a daily income.” Caroline partners with a friend and at the end of the month, they split the bills for rent and water for the shop.

That Tuesday, she was waiting as usual at the bus stop when the driver of a minivan lost control trying to avoid a motorbike that was on the wrong side of the road. Caroline saw the vehicle veer off towards her. Luckily, the driver jumped on the brakes and managed to stop the van, but he had hit her. She was rushed to Kenyatta National Hospital (KNH) and taken into Emergency. “I lost consciousness and when I woke up, I found myself in hospital” Caroline recollects.

Although Caroline escaped without any major physical injuries, the doctor found her blood pressure was very high. “He said it was the shock I experienced that caused the sudden rise of my blood pressure,” she says. This had Caroline worried. Emergency treatment is free, but the physician recommended she start taking medication. Caroline had less than Ksh 100 on her, just enough to cover transport to and from work. She knew she had money in her M-health wallet, but the problem was that KNH is not part of the M-health programme, so she could not use it. With the help of a friend, she went on to a facility that did accept M-health wallet payments and bought the prescribed drugs.

Caroline could not work for a week, which affected her financial status. Being a widowed mother of two teenagers and the bread winner of the family, getting by is a challenge. Besides covering food and rent, she saves money for two saving groups (chamas), school fees for her children, and business rent. That month, she was unable to raise the money to pay her rent on the salon. She was helped by her business partner who covered the rent for February. The accident depleted her savings, as the school fees were due. She was forced to borrow from the chama to ensure that her children were not sent home.

After one month on medication, Caroline went back to KNH for a check-up and her blood pressure had gone back to normal. She is no longer on medication and is back at the salon, working hard to build a better life for herself and her children.