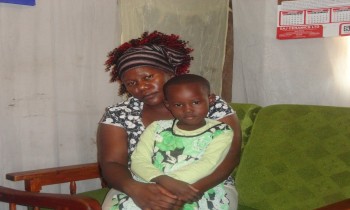 Mystery of a 4-year-old girl

Agnes Anyango is a mother of two daughters and lives in Kibera.  Shirley is four years old, a playful, friendly and lovable little girl. However, Shirley has been struggling with adenoiditis since she was 2 years old. It started with a runny nose and watery eyes, just like a common cold. She was treated for the symptoms, but the problem became persistent with a cough and a blocked nose that obstructed her breathing and kept her awake at night.

Her tonsils were removed, but there was no improvement. The problem became worse and she started fainting. She ran a fever and had no appetite. “She scared me so much that she was all I could think about,” said Agnes. She was taken to the hospital and the doctor discovered adenoiditis.

Agnes has visited the hospital several times with her. Children Shirley’s age, especially those in the slums, are exposed to germs that cause sickness but Agnes is determined to see her daughter’s health improve. But her efforts became uncertain when she found out Shirley has another condition. Agnes was disheartened to learn that her daughter has urinary incontinence. When she was young she wore diapers most of the time. But when she started going to school, it became a worrying problem. An ultrasound was recommended to help determine what could be the cause of the urinary incontinence.

The M-health wallet has been helpful, since she can go to the hospital whenever she notices anything strange. “The M-Health wallet has really helped me. Whenever I see my daughter with watery eyes I know there is a problem.” Shirley’s health problems have become so frequent; she is sick every month. Agnes ensures that she has antibiotics at home for pain relief.

Agnes would like to have health insurance, but it is expensive and she cannot afford it.  She saves Ksh 200 per month for the M-wallet from the income from her hair salon. The cost for the medical services varies. Sometimes she is charged Ksh 800, but when lab tests are ordered or an injection is given, the amount is higher. The doctor has advised a scan and removal of the adenoids, but financial challenges have kept Agnes from saving for the necessary operation. Sometimes Agnes is forced to seek help, so she borrows from her chama and pays back later.

Agnes and her husband support their family together with what little money they make. “When I buy food, he pays rent and school fees for our children.” As much as Agnes would like to see her family doing well, the challenges are considerable. She is unable to save money for other things.

Agnes would like to see her children grow up to achieve their dreams despite the worries about Shirley’s health. She hopes one day to see her daughter cured.