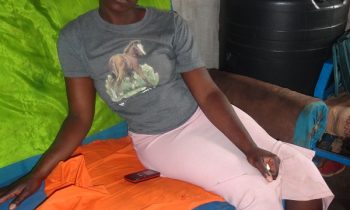 Esther Anyango, a 28-year old mother of two who resides in Kambi Muru in Kibera, lives with a permanent disability as a result of nerve damage.

When she was 8-months old, Esther fell ill and after a visit to the hospital, she was diagnosed with advanced pneumonia and a bout of malaria. Part of her treatment was syrup and getting injections both of which her mum ensured she received accordingly. Despite her health improving slightly, Esther’s mother noticed that Esther’s left leg was bent and she could hardly stand. Every time her mum tried to stretch the leg, she would wail in pain. So her mum decided to take her to a nearby clinic with the intention of taking her to hospital the following day.

At the hospital, the doctor explained that the pain in Esther’s left leg was also causing pain her ankle, hip joint and back. He also told Esther’s mother that Esther’s sciatic nerve had been damaged as a result of an injection having been administered incorrectly. At that time, Esther was 9 months old and as her muscle layer was thin, her nerves were easily prone to damage.

Her father did not handle the news well and despite pleading his case with the management at the hospital, he was not able to get his questions answered. Esther says, “My father is a poor man and nobody listened to his complaints”. Esther’s parents decided not to take their daughter to the hospital again. Her mother massaged her leg with the hope that it would revert to its original state.

Esther began walking around the age of 2 years but with a limp. She received a lot of rejection from her peers and this left her sad most of the time. With a low self-esteem, she spent most of her time indoors. She could not go to school like the rest of the children her age as her parents feared the long distance might wear her out.

She lost her mother at the age of 10 which made her life more complicated. With the family depending on her father who left early in the morning to make as much money for the family as he can, Esther became lonely and started following her siblings to school. She got lost twice and each time was taken home by a Good Samaritan. When her father realised that she really wanted to learn, he enrolled her in a school closer home so she could be less lonely. The quality of education at the school was sub-standard but it was better than her staying home alone. With new friends at school, she gained more confidence and felt more comfortable around her siblings as they supported and encouraged her.

Esther fell pregnant at the age of 18 and decided to live with her boyfriend. After two years, she conceived again but this time, she had many challenges but did not lose hope. The father of her children left and because she was unable to support herself, she decided to move back home with her family. Her disability limits her ability to work and she performs most chores while seated.

Financial constraints have prevented Esther from joining the National Health Insurance Fund (NHIF). The roll-out of M-Tiba on the other hand, has given Esther an opportunity to save for her children who are now aged 9 and 7. With the wallet, she is now able to access health services whenever she needs. She is looking forward to her children being healthy and growing old. Her children always encourage her and she gains the strength to carry on. Her advice to everyone is not to give up as things do get better eventually.