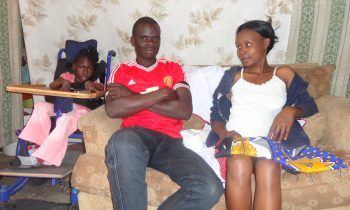 A good fight for a good cause

7 year-old Ashly Ajeyo was diagnosed with cerebral palsy at 6 months. Her parents Gertrude and Charles welcomed their daughter into the world with joy after a prolonged, difficult labour. At the facility where Gertrude delivered the qualified doctor was not available, forcing trainees to attend to her. After the birth Gertrude noticed a cut on her baby’s head but a nurse assured her that it was not deep, so she dropped the issue and never thought about any future effect to the baby.

According to the doctor’s report, the baby was exhausted from the birth and could not cry or breastfeed. She also had fluids in her lungs. Gertrude was discharged without being informed about her new-born’s health. She went home happy and in the following months took her daughter for all scheduled check-ups and immunizations. It was during one of these routine visits, when Ashly was 6 months old, that the doctor suspected a problem: the baby’s development was slow and her muscles were weak. She was referred to a paediatrician.

Ashly was diagnosed with cerebral palsy and immediately started on physiotherapy. Gertrude and Charles were devastated and the more they found out about the negative implications of their daughter’s condition, the more hurt they felt.

Physiotherapy sessions were twice a week and for two years, Gertrude was dedicated and hopeful that Ashly’s health would improve, but when progress slowed she lost hope. Sole provider Charles is a casual labourer, so their income was unstable. Ashly started missing sessions because of a lack of money, and finally Gertrude stopped taking her altogether for two years.

When Ashly was 5 years old, Gertrude was introduced to a group of parents raising disabled children. She learnt about a physiotherapy centre within their slum, where most of the parents in the group took their children. After consultation with the district hospital Ashly was transferred in 2015.

It is almost two years since Ashly started physiotherapy again and she can now actually roll out of bed when she wakes up, a level of movement she has never reached before. Charles is certain that with continued physiotherapy his daughter will learn to sit on her own and even walk. He is working hard to ensure that Ashly does not miss a treatment and helps his wife carry Ashly to the centre.

It is encouraging to see a young man like Charles lovingly stick to his family here. He knows that his wife cannot bear the burden of raising their daughter alone and the two of them support each another. The couple have encountered social rejection through superstition and prejudice. But thankfully, the couple’s immediate family understand that this is a health condition.

With all the challenges the young couple has faced since they had their daughter, they decided to wait until Ashly had reached a certain age before they tried for another child. Gertrude is now 5 months pregnant with their second baby. Charles wants his wife to deliver their second baby safely with the help of a qualified professional, which is why he joined the National Health Insurance Fund (NHIF), the government health scheme. In addition, he has enrolled in the M-TIBA health saving scheme to keep improving his daughter’s health.

Charles and Gertrude believe that staying together as a family has made them stronger and together they are ready to fight on.